Today my going to Church and taking communion had the special intention to be in solidarity with my countrymen the Filipinos in the wake of one of the worst land-hitting hurricanes in recorded history. Googling images using the terms Philippines, Haiyan, and Yolanda will be enough to get the whole picture… go ahead, please… because I hesitate to post some here…

Haiyan is the hurricane’s international name, Yolanda is its local name. The Y of Yolanda reflects the advent of this hurricane to us at the end of the year almost, since we name the typhoons alphabetically. Hurricane, typhoon, and tropical cyclone refer to the same thing, which is a type of storm.

I feel like picking up the entire sprawling archipelago and hug it tight, to comfort. The amazing thing is I know that somehow my mga kababayan (countrymen) will get over this because that’s how we are. Generally we’re simply naive that we can’t even think of berating God the way Job did. In Hiligaynon we’d all at once say in a resigned tone, “pag-buot sang Maka-ako”, with a bent head. The will of the Almighty.

The area worst hit by Yolanda had also suffered a magnitude 7 earthquake recently. Philippines is along the Pacific Ring of Fire as well as in the path of tropical cyclones. We are also affected by the El Niño. With these three things, at the least, it is easy to understand why our faith in God is a given thing. It doesn’t ask for philosophical considerations or systematic qualifications. Our faith in God comes as easy as breathing, a constant, so much so that even the worst of disasters is not strong enough to shake us off it. On the contrary, it is our lifeline and so the harsher the experience the tighter we cling to it. [ 13.Nov.13 Updates, below, links to 3 research websites, help elucidate what I’ve written in this post]

Earlier in our history there were those who called out to Bathala, a name that now has come to be heard throughout the archipelago by way of lessons in elementary school. Theologians will argue that this Bathala is not Yahweh or Elohim. This argument is irrelevant in this post, for a special purpose…

… Because I would like to translate Joey Ayala’s song Bathala into English as my way of being one with my people. I need to render Bathala as God in English, otherwise it won’t make much sense. I assume that when Mr. Ayala composed this piece he was referring simply to God, the One that the overwhelming millions of us go to church for on Sundays. I assume that when Mr. Ayala made this song he simply used Bathala to refer to the One whom I believe created everything, the Creator referred to in the Bible. Okay.

It can be argued that the globe is undergoing the cyclic ice ages and so humans have very little contribution to the warming. Okay. I don’t want to argue against that because I’m not an expert in that field. However, humans do so many things that result in the release of chemicals in the atmosphere, whose prevailing presence in turn blocks the escape of heat into outer space — the so-called greenhouse effect. Still, even if the cyclic ice ages is indeed the culprit of global warming it does not follow that we are free to do as we will with nature.

We do not have the freedom to unleash greed. Cutting of trees for profit. Mining for profit. Synthetic compounds for profit. Indiscriminate consumption for pleasure. The worship of ease and comfort. We are so submerged in greed that we cannot anymore tell between it and our skin. It cloaks us. Our souls are so soaked in it we feel like dying without it. We simply must consume frantically. We simply must have money in amounts beyond embarrassment.

The Homo sapiens sapiens is guilty of greed, from the poorest to the richest, from the most ignorant to those with multiple doctorates. So I appreciate it that Bathala is what Mr. Ayala used instead of Panginoon (Lord) or Poong Maykapal (God Almighty) or Diyos (God) because the song is like a confession of my people of the guilt to which we are part of. The mega-conglomerates of the global economy come to my mind as I meditate on this song yet I am reminded of Jesus’ words: forgive them for they do not know what they do.

The Mahatma Gandhi and Michael Jackson have said to the effect that if we want to change the world then we must start with our own self. “Be the change you want to see in the world.” “I’m starting with the man in the mirror.” A little less greed goes a long way. It’s a butterfly effect, like the phenomenon with the storms: a reduction in the propensity to consume will create a chain of events of unimaginable scale. Who knows, it may even prevent more super hurricanes from occurring again. Hurricanes are the collective manifestations of teeny-weeny changes of atmospheric pressures here and there over time, of tiny butterfly-wing drafts so to speak.

In calamities such as Yolanda my mga kababayan are simply too occupied to engage in blame games — that’s far from our thoughts. In solidarity, therefore, with this post I celebrate today’s going-to-church spirit of my country and render into English what sounds to me as our collective confession and supplication. I rest my diwa (inner self) and refrain from pointing a finger. Mr. Joey Ayala, sir, in case you come across this, please tell me on the parts that I got wrong; and I hope it’s fine with you that I have your song here, shared with the rest of the world. Here goes:

the brown lands and verdant forests,

the saltiness of the seas and the sweetness of air.

All things that came from Your hands

have their own purposes in nature, the home they were reared in —

— the fulfillment of which entails reckoning to the detail.

him You shaped, established on earth,

provided with intellect and soul,

in order to enrich the world.

became the plow that tamed the land,

became the vessel that battled the ocean waves,

became the fire that banished darkness.

in wealth this nature You have created

and all creatures can partake of it

were the acquisition of them be done mindfully.

simply-living for some is not enough,

they were blinded by greed’s glitter,

they worshipped a selfish god.

They partitioned the lands among themselves,

the high seas and the atmosphere now have fences;

his fellow man and even the animals are robbed of their homes.

None are safe from their cruelty.

They say that progress and well-being is their aim

but what has turned out is violence.

You shaped me and placed me in this world,

earth is my origin/my sustenance comes from it,

and my life is a gift to it. 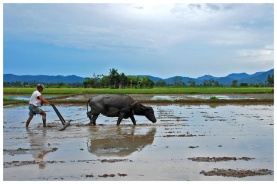 give strength to this earth-ranger of Yours

so to prevail against the opportunists;

may You hear my prayer;

“Awit ng Mortal” is a Pilipino song, by Joey Ayala. Awit means song, and so the title can be translated as Song of the Mortal One, or Song of the Mortals. I render it as Adam’s Song because the story of Adam in Genesis is profoundly of one who came from dust and who is returning to dust. “Adam” is strictly not a proper name but is actually a generic term for “one [who is] from dust/ground/earth [= adamah]”. I thought of Adam since I felt that the title emphasizes mortality being a prominent description of humanity.

I especially like the song, both the melody and the lyrics. I want to try translate it into English so that I can share its thought to those who can’t understand our national language. Doing it word for word, or line for line, is rather difficult, awkward, so I kind of tried to get hold of my gut understanding of the statements. (Mr. Joey Ayala, sir, in case you come across this, I hope I did okay. Peace.) Here goes:

What dictates a person’s worth? Is it possessions? Is it reputation?

Against what should an endeavor be weighed? Against which should conviction be gauged? Must there be expected rewards for all good deeds?

Our lives are just ticks in time, flicks in that great flame; commence today the tomorrow that is your dream.

Each heartbeat happens only once. This beat is the rhythm of the song that is us; that which has an end to it.

Must there be expected rewards for all good deeds?

We age, we falter, we’ll succumb to the earth; however, your legacy, in its fruition, will wax beyond you and where you have come from.

Our lives are just ticks in time, flicks in that great flame; commence today the tomorrow that is your dream.

❤ hello there 🙂 Today is April 22, 2014 and I’m putting a link to this song’s melody that was uploaded by somebody on YouTube. The vocals is by Ms. Bayang Barrios, herself an accomplished music artist. Joey Ayala’s group that performed the song is called Joey Ayala at ang Bagong Lumad [“Joey Ayala and the new native”, for my lack of a better translation … or could also be “alter native”, which is a variant of “alter-native” and which speaks of the band’s genre, alternative music, and which also speaks of the band’s music’s message(s) to its audience. Moreover, I found a site of Ms. Bayang Barrios where you can read some interesting stuff about her:  http://www.bayangbarrios.com/bayang/bayang4.htm .

Here now is the meditative song of above …  Awit Ng Mortal.  Both links lead to the same page. 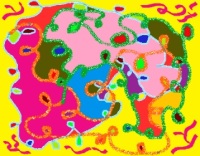 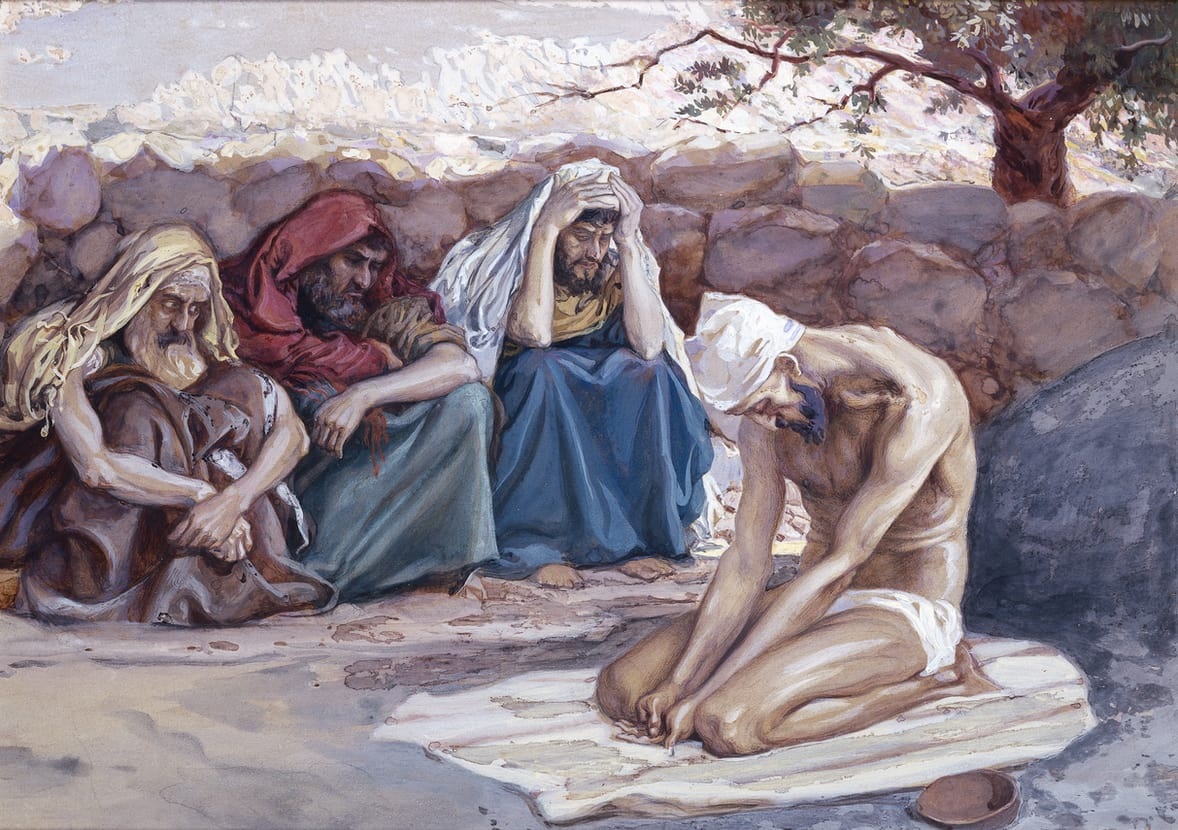 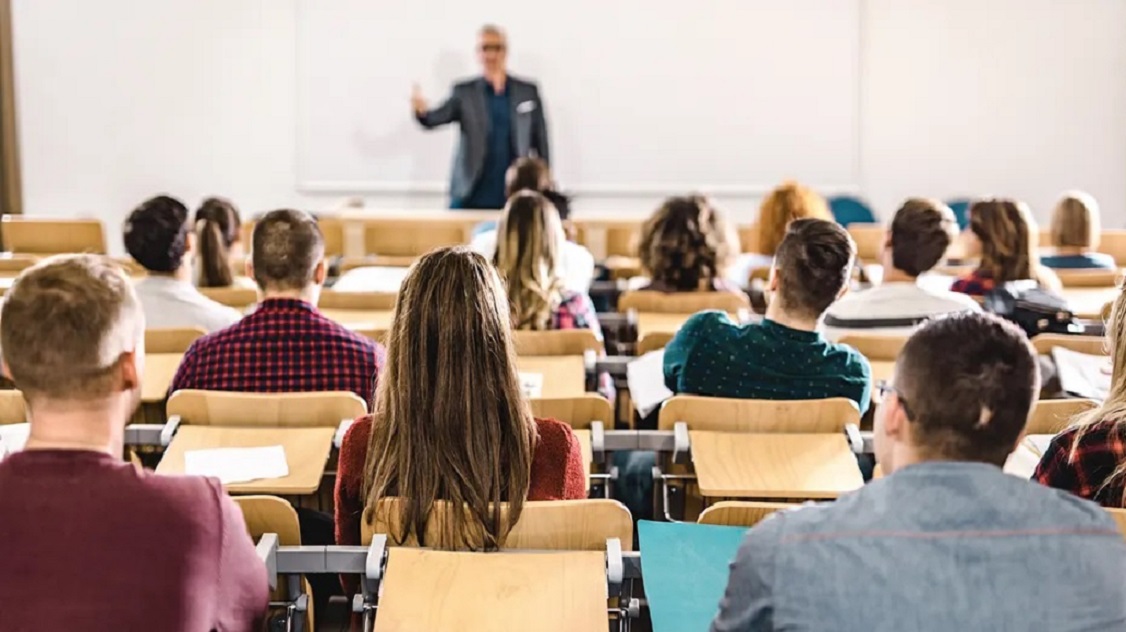 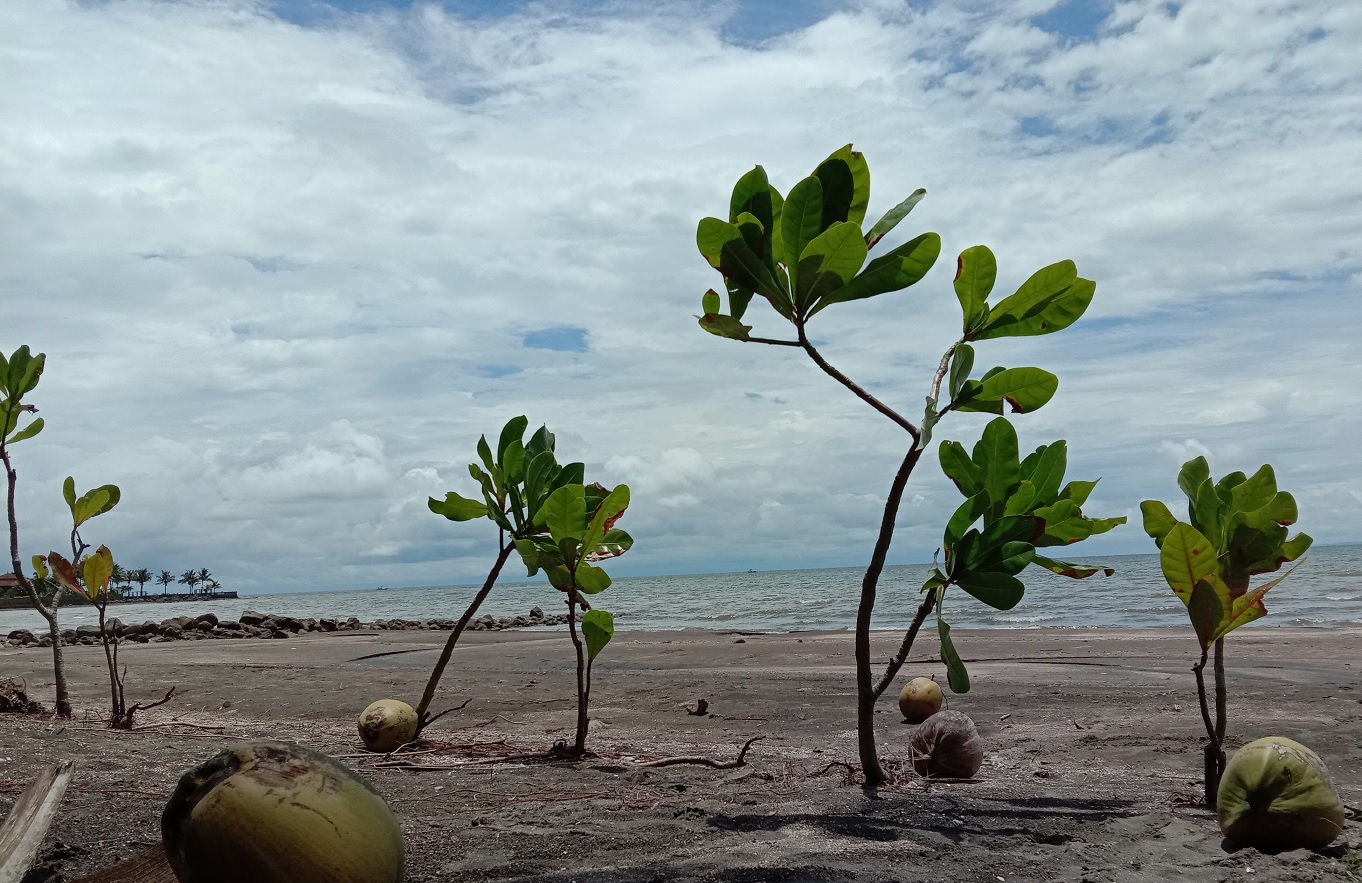 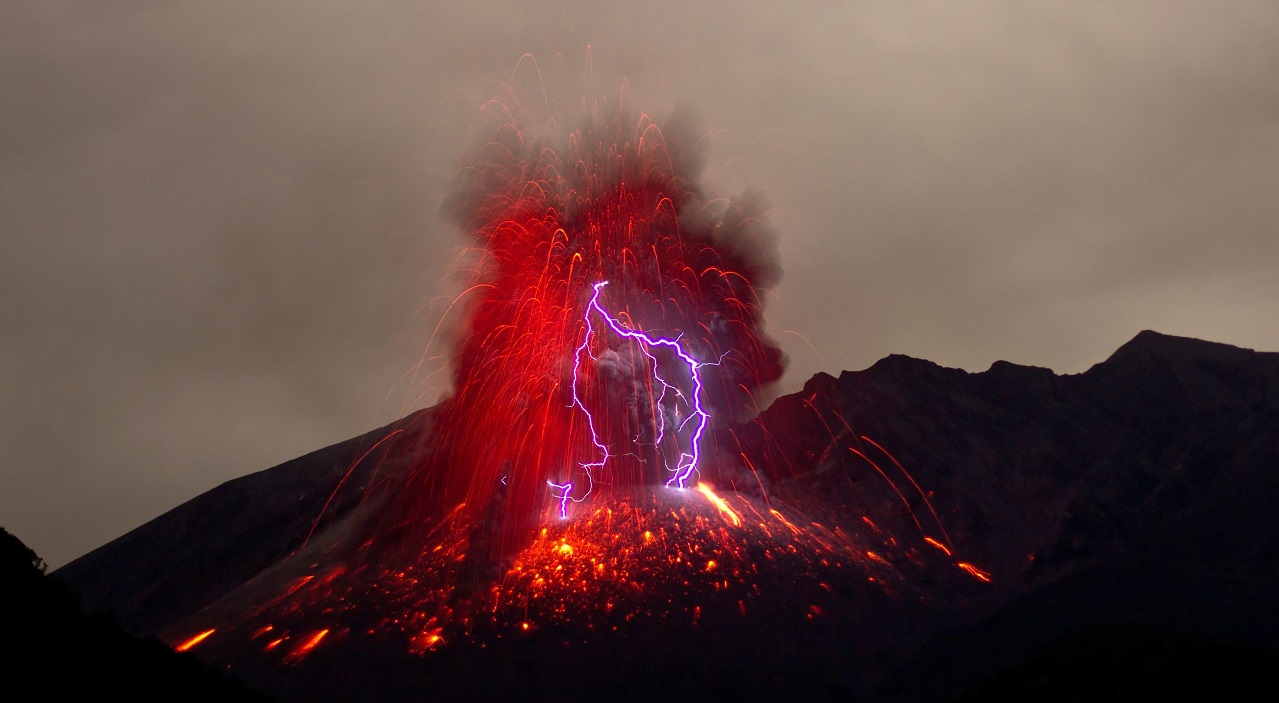 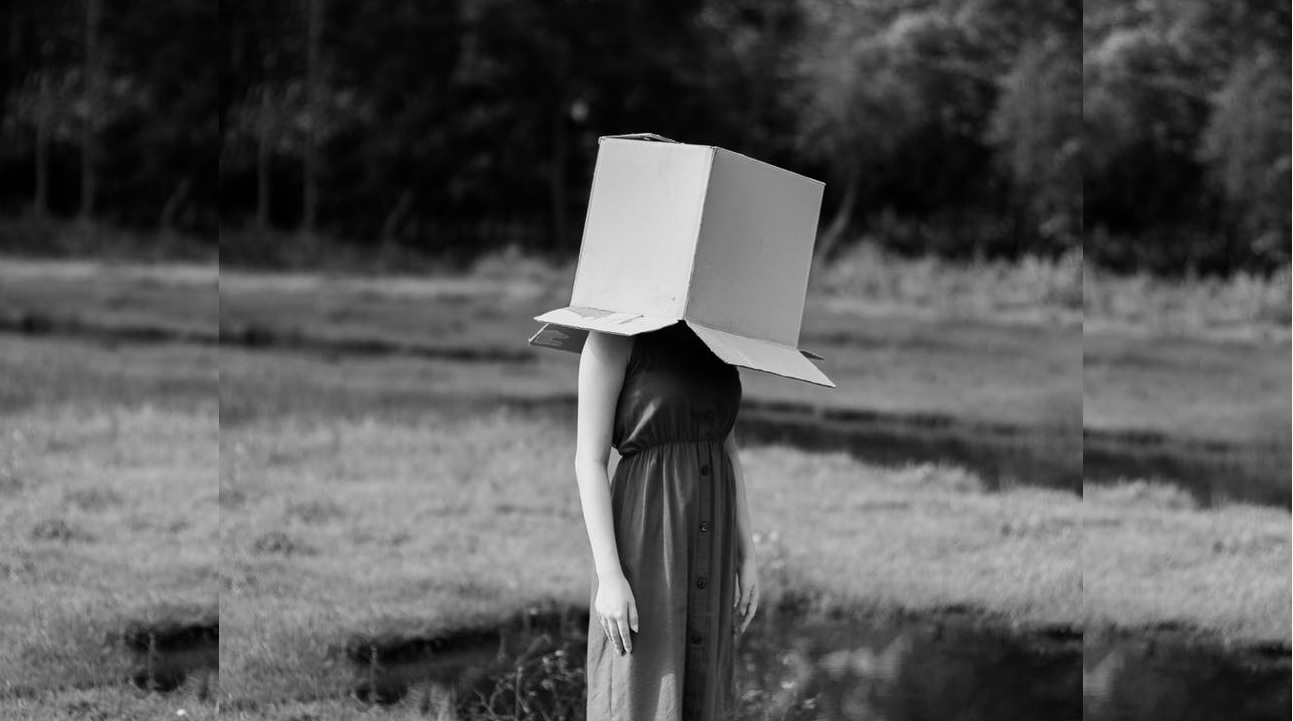